RENO, NEVADA: A WESTERN UNION TELEGRAM SLIPPED UNDER A BOARDING HOUSE DOOR ON AN EASTER SUNDAY 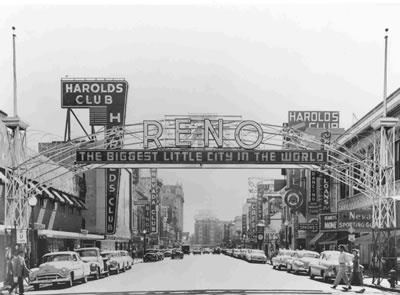 It wasn’t funny really, yet nearly forty years later I smiled, almost laughed, as I thought of it while walking on the treadmill. What makes slapstick tickle my ribs, even real-life slapstick? Aunt Lacy and I were in Cincinnati on a visit, walking along a dirt path beside the road from a bus stop to the house of her Uncle Levi, my great uncle. Ahead was a metal sign stretched between two posts.  I went around it. I suppose Lacy was looking down and didn’t see it; I don’t know what, if anything, she thought of the posts sticking up out of the ground to her left and right as she tried to walk between them. Or maybe she didn’t see them at all. BAM! her forehead smacked the sign.

I tried not to laugh. She needed my arm to steady her. She was seeing stars. “I’ll have you know it’s not funny, toodles,” she said.

Maybe I laughed because Lacy was always fun, even when she nearly knocked herself unconscious. In one of my earliest memories she arrived, in black wedge heels and fur stole, by Greyhound from Michigan (we lived in Cincinnati then) and (all of this as a single early childhood memory, mind you) while babysitting my brother and sister and me took the lid off the popcorn popper too soon, sending kernels all over the kitchen. She told a story about the Easter Sunday when I was born: she’d come back to her boarding house room after working overnight in Harolds Club, Reno, where she was a cigarette girl. She’d just settled into bed when she saw a telegram as it was being slipped under her door. It told of my existence.

When I was old enough to know what divorce was, and to know that Lacy’d had several, I assumed she’d been in Reno for a quickie, like Marilyn Monroe in The Misfits. But, no, Lacy moved to Reno with number three husband, Harry, only didn’t stay with him.

She came damned close to losing her life during her time in Reno. “I never should have gotten in the car, because I knew he’d been drinking.” He was as anonymous to me as the ersatz Uncle Harry I never met. “But he and his girlfriend and the fellow I was with wanted to go to Tahoe.”

After the head-on crash on a curve, their car rolled down a mountainside to rest on its roof. “I was conscious. I remember hearing sirens in the distance.”

She lost her teeth, had her jaw wired shut for weeks, could eat only  liquids through a straw. “When I could talk, the prosecutor wanted me to testify against the fellow driving, but I didn’t do it. He’d lost his girl and his best friend in that accident. I figured he’d suffered enough. He didn’t need to go to prison.”

Each year, as my birthday rolls around, I think of the telegram being slipped under Aunt Lacy’s door, of her lying in an upside down car waiting for help to wind its way up a mountainside, and of a high school friend who died in a car wreck during our freshman year of college.  I think of all the years I’ve lived since his death and feel gratitude that fate has let me get this far along.