Good Neighbor George: in this case Stephenopolous, down the hall 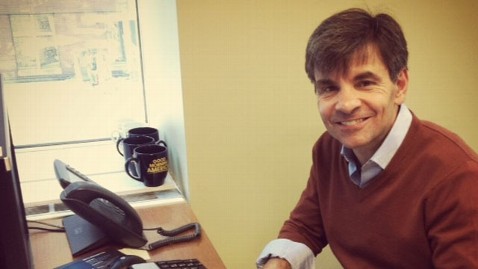 Todd and I spent spring semester ’92 in Madrid. Not being politicos, we didn’t care that we were missing a presidential primary season and paid little attention to what was happening in the US. A friend visiting Madrid mentioned that a governor from Arkansas was leading the race for the Democratic nomination.

Home in Washington, DC, in June, we flew to Oregon to spend a week on the coast with family. Our second or third day there, Todd waved a news magazine article in my face. “Gary, look who this is!”

“It’s George. He lives down the hall. The guy who borrowed a cup of dishwasher detergent from us.”

The cup of detergent rang a bell. Who knew anyone actually borrowed cups of anything? We had been sitting in the living room, Todd reading aloud pages from one of my manuscripts while I listened, only to be interrupted by someone knocking on our door. In a condo like ours, no one ever knocked  unless you’d buzzed them in through the courtyard gate and building door downstairs.

The magazine article was about upstart George, the Clinton campaign communications director,  making a phone call like any Joe Schmoe to a  telethon of  President Bush.

Who knew the guy down the hall had made a newsworthy person of himself while we weren’t paying attention.

Early in Clinton’s presidency a picture of our condo building appeared in the Washington Post with the caption, “Not everyone in the administration lives high on the hog.”

George lived in our building for a year or two more. Every day there were packages for him in the hallway by the mailboxes. And once, when we were coming into the building through the alley at the back, we saw Jennifer Grey taking out the trash. (Watch for rats in the alley, Jennifer.)

From our building George moved to the top floor (4th or so–Washington is a low-rise city) of a  small building on Connecticut Avenue near Kramerbooks. With that, he disappeared from our lives since we don’t watch network TV. Poor George.