Women’s fashion: “Pasties” bikinis for 2015? Ladies, are you ready? (Gentlemen, start your engines–or, rather, I should say, try to keep your engines in neutral.) 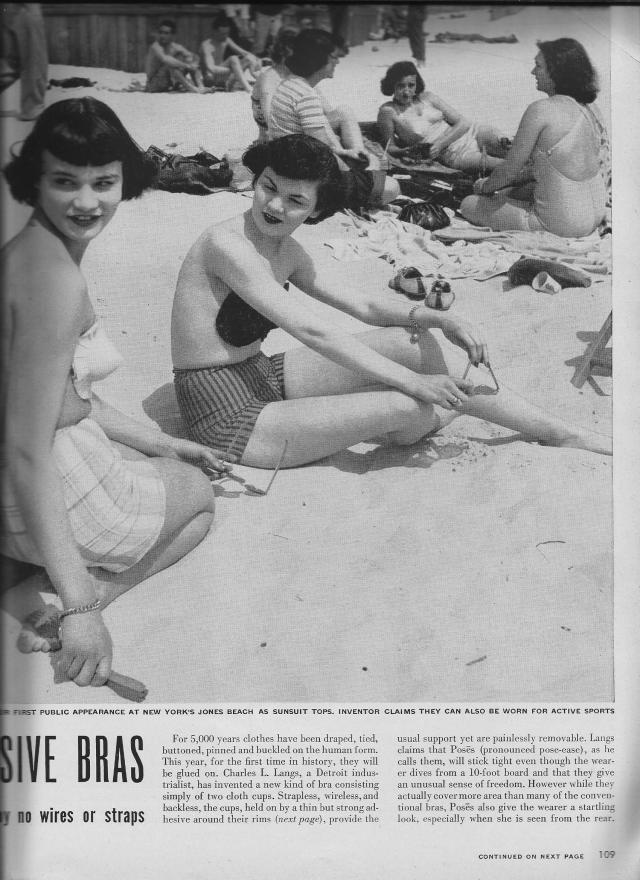 “For 5000 years clothes have been draped, tied, pinned and buckled on the human form. This year, for the first time in history, they will be glued. Charles L. Langs, a Detroit industrialist, has invented a new kind of bra consisting simply of two cloth cups. Strapless, wireless, and backless, the cups, held on by a thin but strong adhesivi around their rims, provide the usual support yet are painlessly removable. Langs claims that Poses (pronounced pose-ease), as he calls them, will stick tight even though the wearer dives from a 10-foot board and that they give an unusual sense of  freedom. However, while they actually cover more area than many of the conventional bras, Poses also give the wearer a startling look, especially when she is seen from the rear.”

A month or so after the article, the ad, below, appeared in Life.

I’m sure as hell glad guys don’t wear anything over their beautiful pecks.

This entry was posted in Ads, women's fashion and tagged Bikini cups without straps, Poses. Bookmark the permalink.