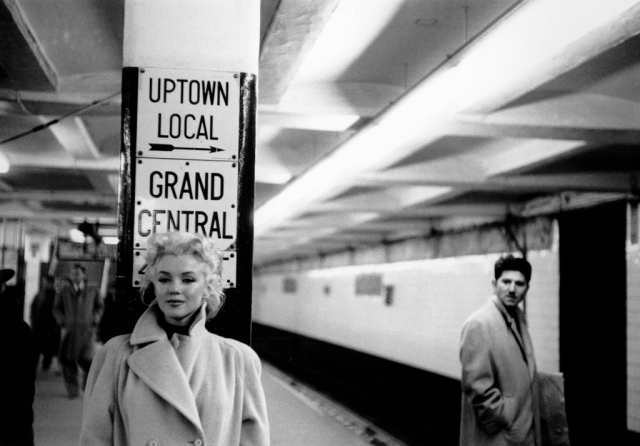 I came across this photo on several blogs, among them thisismarilyn.com. None gave a history until I found “Marilyn Monroe–4 Days in New York,” Brock Street Gallery:

“As one of the worlds most recognized faces, it was impossible for Marilyn Monroe to travel on public transportation However, Milton Greene her business partner and advisor wanted to re-position Marilyn’s image; this was an attempt to portray her as just another struggling actress, engaged in an unequal struggle against the all powerful movie studios. The photo shoot took place in Grand Central Subway Station, wrapped in a camel’s hair coat, her blonde hair subdued nobody recognized her. While some of these photos are posed, they nevertheless manage to be strikingly natural shots. Successfully conveying an image of Marilyn, as just another working girl.”

Marilyn Monroe is on my mind a lot these days because my novel-in-progress WAITING FOR MARYLYN? features a young guy who orbits around a Marilyn Monroe look-alike.

This entry was posted in Historic photographs, movie stars and tagged Marilyn Monroe. Bookmark the permalink.